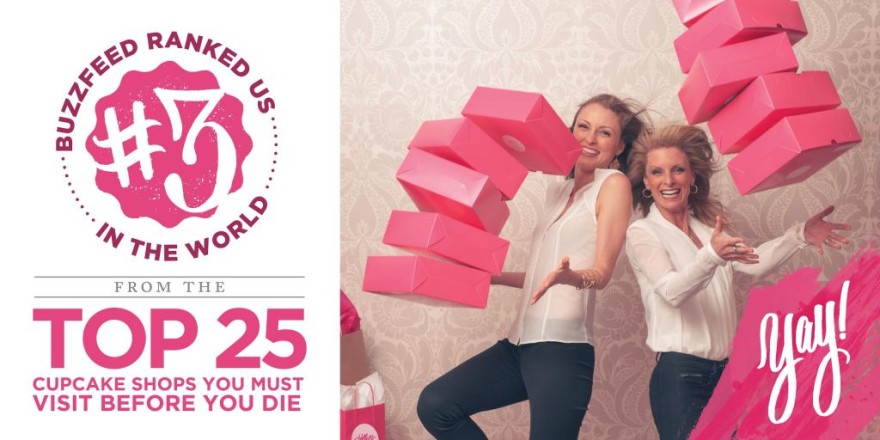 July 21, 2015 Burlington, ON. Kelly’s Bake Shoppe received a sweet honour this week being named 3rd in a list of the Best 25 Cupcake Shops in the world. The BuzzFeed community poll is a bucket list of bakeries which include places from around the globe including Switzerland’s Cuppin’s, Cupcake Central in Melbourne, Australia, Cuckoo’s Bakery in Edinburgh, United Kingdom South Africa’s Charly’s Bakery and New York City’s legendary Magnolia Bakery. Based in Burlington, Ontario Kelly’s Bake Shoppe is co-owned by mother/daughter team Kelly Childs and Erinn Weatherbie. The award winning, healthy bakery offers a tempting variety of gluten, dairy, egg and peanut free treats, including their signature Mile High Brownie a health conscious yet decadent dessert which took top honours at the Toronto Vegetable Association Awards with two consecutive wins as the city’s best dessert.

“We were thrilled to hear about the BuzzFeed poll,” says Kelly Childs.  “It’s already very satisfying to do what you love, what you believe in and to have that passion embraced in this way is incredibly rewarding.  The messages of congratulations and support have been overwhelming”.

BuzzFeed readers ranked Kelly’s Bake Shoppe #3 on a list of the “25 Sweet Cupcake Shops Around The World To Eat At Before You Die”; adding comments about Kelly’s products such as, “They have so much flavor despite being gluten and dairy free. The perfect treat to share with anyone regardless of their dietary restrictions.” Mil

“Not a day goes by that we don’t hear from customers who are eager to tell us about how much they appreciate what we have done to create menu options that help them in their commitment to live healthier or in their struggle to find high quality food that is compatible with their sensitives or allergies,” explains Erinn Weatherbie. “We created these menus for our family and we couldn’t be happier that we now have an even bigger family of supporters”.

Motivated by the desire to create an improved culin­ary exper­i­ence for diet­ary restric­ted indi­viduals, Childs and Weatherbie created Kelly’s Bake Shoppe as a destination for foodies who share their own commitment to choosing nutritious foods as well as living a kinder, sustainable life. Kelly’s Bake Shoppe uses only plant-based organic ingredients and natural colours (sourced from flower petals) and natural organic flavours. They also use fair-trade and organic cocoa and non-refined sugar to create a beautifully made, over-the-top menu of irresistible baked goods that are gluten-free, peanut-free, dairy-free, casein-free, egg-free, and butter-free selections.

Owned by mother-daughter duo Kelly Childs and Erinn Weatherbie, Kelly’s Bake Shoppe opened in December 2012. In that short time, they have already won numerous awards for their products including Mile High Brownie, Dulce De Leche Cupcake and Skinny Cookie and have established devoted social media following and demanding public appearance schedule. A Random House cookbook is scheduled for release in in early 2016.

Perfect for anyone looking for guilt-free healthy treats that happen to be Gluten Free, Egg Free, Dairy Free, Vegan, Artificial Colour Free, Soy Free and Refined Sugar Free, Kelly’s Bake Shoppe is located at 401 Brant Street in downtown, Burlington, Ontario.   Baked fresh in the morning and delivered by 6pm, Kelly’s heavenly treats are available for daily delivery to Toronto and GTA for a flat rate of $15.

For more information please visit www.kellysxo.com and connect with us online at: 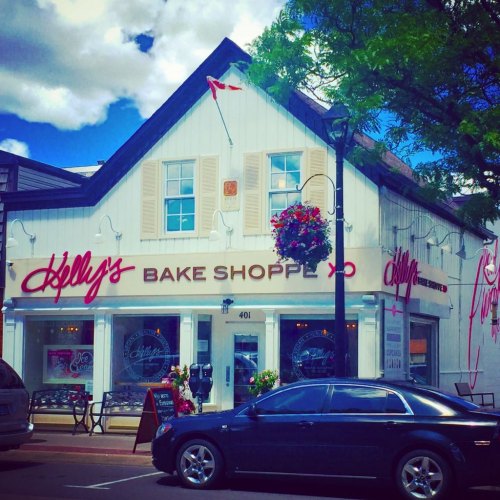